SUNI'll contribute to society through supply of a APV lining product. 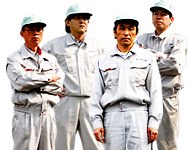 01.“When technology is passed on.”
Technicians Kazuo Danjo and Shigesaburo Sakaguchi
02.“Aiming to be unique.”
Technician Mitsuyoshi Kawaguchi
03.“The trusted reliability of an expert.”
Technician Tatsuro Uchida 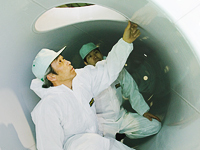 (Kazuo Danjo) I pass on this company’s sophisticated technical expertise to subordinates as a team leader with more than 20 years of experience in the fluororesin industry, and am involved with lining operations for major devices.

(Shigesuburo Sakaguchi) I have held a welding certification for 7 years. I am involved with lining construction for a variety of containers as a core member of the manufacturing staff. 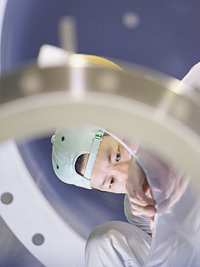 (Kazuo Danjo) In addition to promoting the production of high performance lining devices, I nurture experts who create superior products.

(Shigesuburo Sakaguchi) Passing on the sophisticated technology of the company, I aim to produce World One (the world’s most superior tank) products. 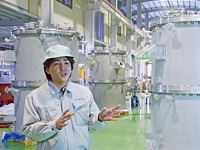 As a designer, I was involved with the designing of lining products such as chemical delivery tanks for 5 years.

Subsequently, as a design department head, I now perform management operations concerning quality and delivery as a person in charge of design, materials, and manufacture. 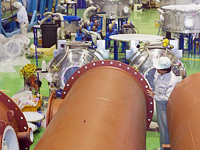 As the person in charge of a production section that seeks to produce unique lining products admired around the world, I constantly strive to ensure that we do not lose our customers’ trust through errors.

I believe that there can be no compromise when it comes to our work, so that our customers are totally satisfied with quality and delivery deadlines, and so that we are able to offer products that continue to improve.

Although we occasionally we receive complaints from customers, or may feel frustrated that work is not progressing how we would like, I strive hard to not succumb to these feelings, and pass on the sophisticated technology and experience of my predecessors with pride, maintaining individual expertise at the highest level possible, and seeking to create unique products that our competitors are unable to match. 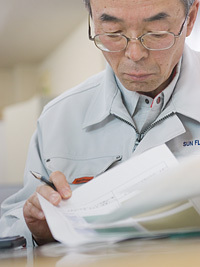 I was involved with research into fluororesins for the Daikin Industries Ltd. chemical business for about 40 years.

With the development of APV, I am now working at Sun Fluoro System.

Using my development experience with APV, I now perform quality management with a focus on APV construction.

I am also involved with the lining tank diagnosis system, a new service that enables diagnosis of lining tanks from outside. 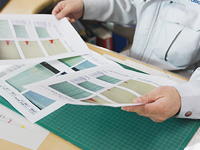 Over the last 40 years, a variety of fluororesins have been used at hydrofluoric plants, and even for the same material life spans vary widely.

The development of APV has been a result of development carried out with an awareness of the importance of production control and construction technology that exploits the special features of the materials.

You could say that Sun Fluoro System is a company capable of making use of a product after it creates it.

The APV we produce today have been created as a result of an integration of APV made by raw material manufacturers and construction performed by Sun Fluoro System, and subsequent reform and further development of construction technology. We now really feel the joy and responsibility of further developing lining products using these special features.

We aim to make further stabilized construction technology in the future.